45th President of the United States of America

“I love people who love America and who know we have to fight the Deep State to take America back. We need great leaders to rise up and continue that fight for our values. Angela Rigas is a committed fighter! She is a champion for America First and for documenting the 2020 Voter Fraud, and an amazing American. She embodies the spirit that made America great, and it is no surprise to me that she’s related to Revolutionary War Heroes. Mom of four boys, Angela stood toe to toe in court against Michigan’s disgraced shutdown Governor Gretchen Whitmer and crazed Attorney General Dana Nessel. She’s not afraid to fight, and not afraid to lead. That’s exactly what Michigan needs right now. I wholeheartedly Endorse Angela Rigas for Michigan State Representative!” 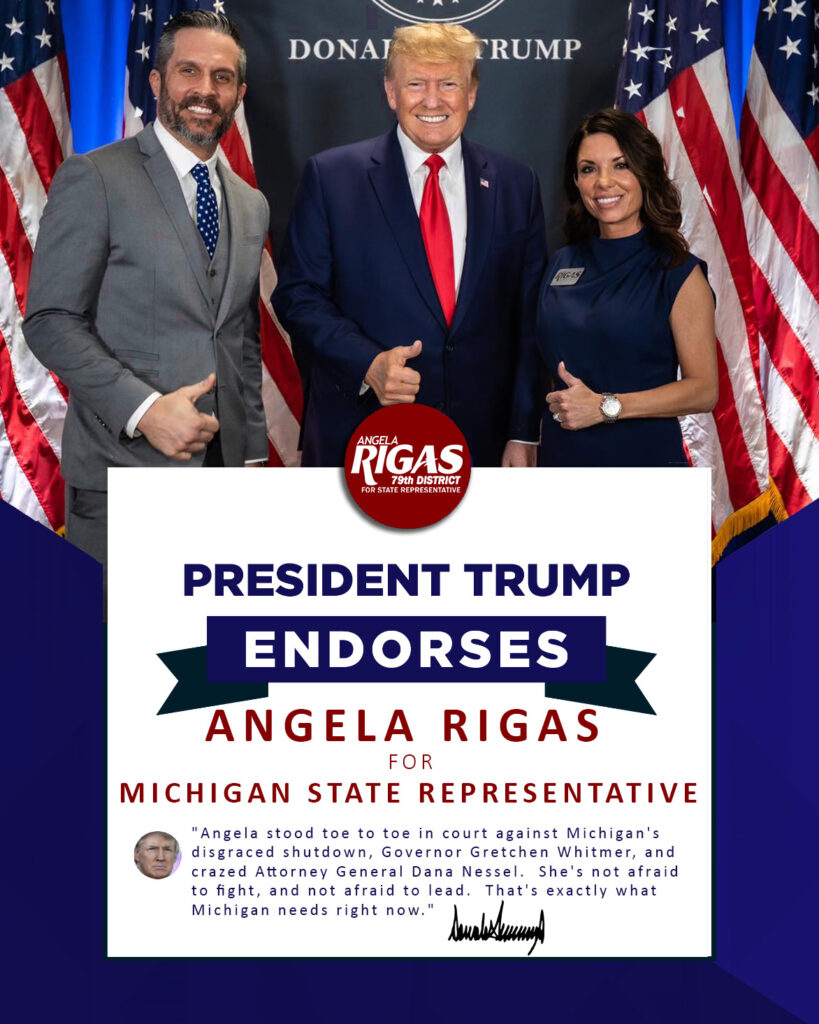 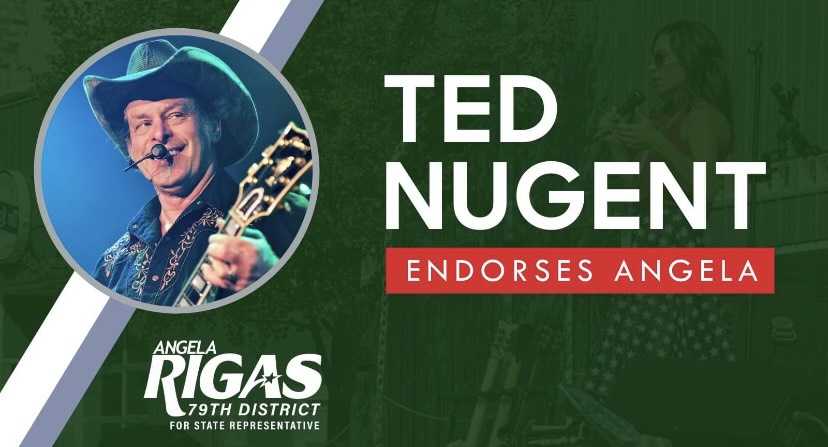 “Angela Rigas is a proven fighter and defender of liberty and freedom. She defied the tyrannical and Unconstitutional Orders imposed by Gretchen Whitmer and her crazed puppet Dana Nessel. Angela didn’t flinch when the Whitmer administration took her to court, she stood up and fought back winning her case.

Angela has my total confidence and full endorsement. I urge our vast network of grassroots patriots to support her by donating, volunteering and supporting her for Michigan’s 79th house distritct” 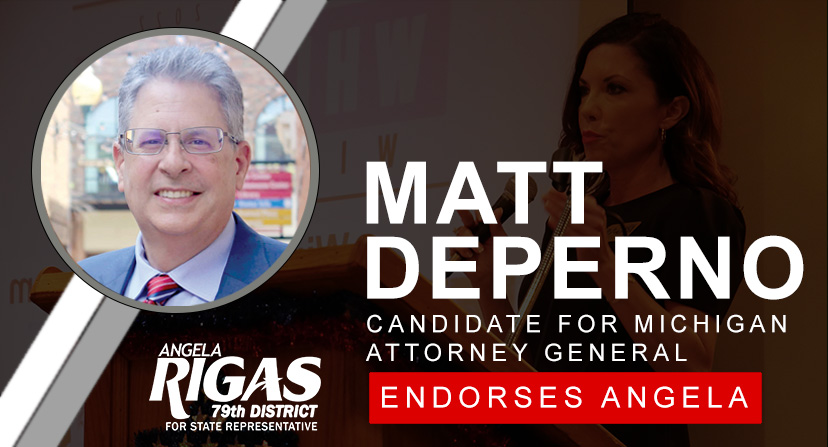 “I am endorsing Angela Rigas to represent the 79th district for the State of Michigan.

This is an easy endorsement for me to make. Angela has more courage than most men that I know.

She has been battling for liberty and is willing to keep the government limited. With her boldness and her intelligence, I know we will be very well represented in Lansing.“ 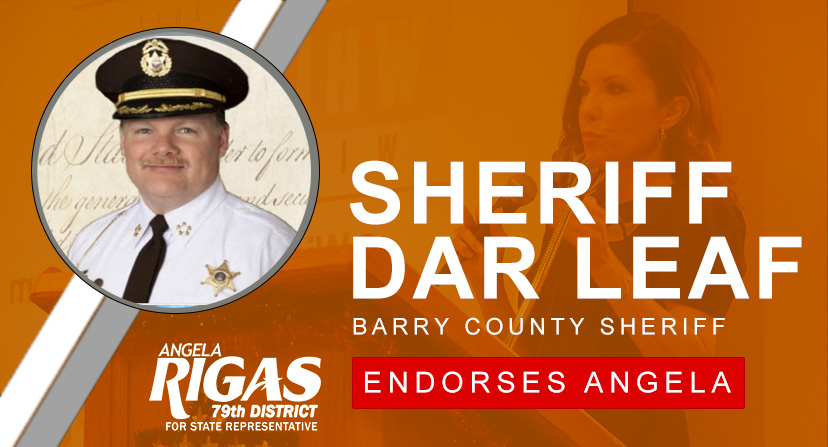 “Angela Rigas is a new breed of bold conservative leader. She truly cares for we the people. I learned a long time ago, when I ran my first race for Congress and beat a 26 year Republican incumbent, don’t ever forget who you work for, the great every day, ordinary people you want to represent. I’m confident that’s what is Angela’s top priority. She has the fighters’ spirit we need in Lansing to take back our state. Please join me in support of Angela Rigas for State Representative of the 79th District in the August 2nd primary.”
-Ambassador Pete Hoekstra 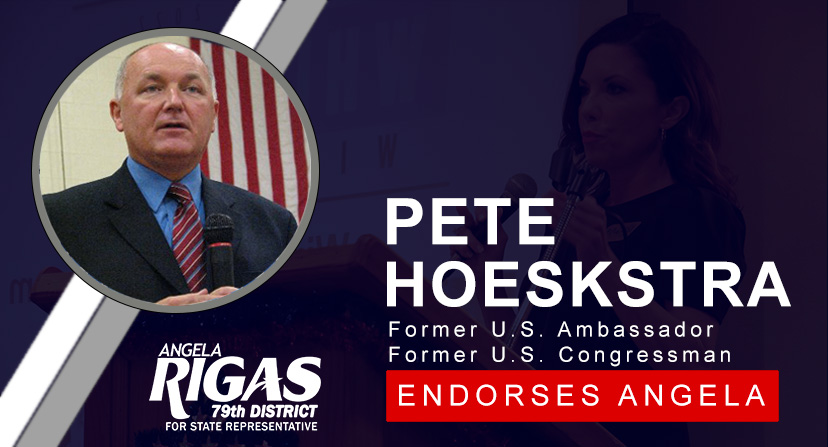 Michigan State Board of Education

“The Left is in full assault mode, against our kids.  CRT, Common Core, transgender agenda…there’s a real battle going on for the souls of our kids and we need Angela Rigas in a leadership role as soon as possible. I fully endorse Angela for State Representative. She’s a solid, constitutional conservative that we can trust.“ 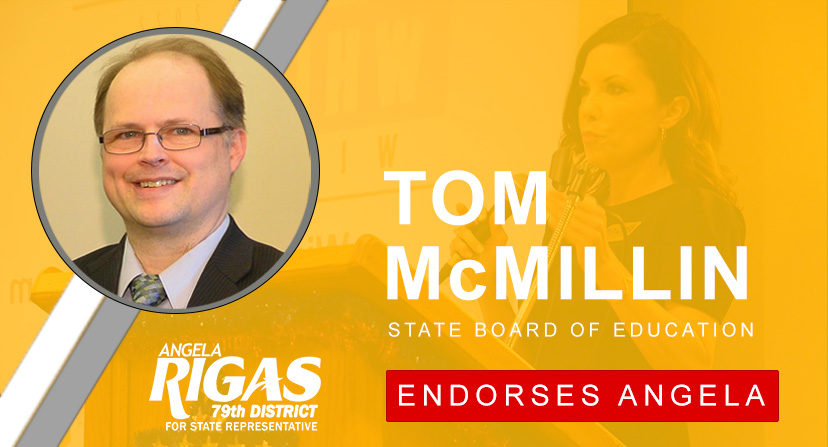 “Angela is a proven advocate for Parental Rights, and a candidate you can trust to defend family values.” 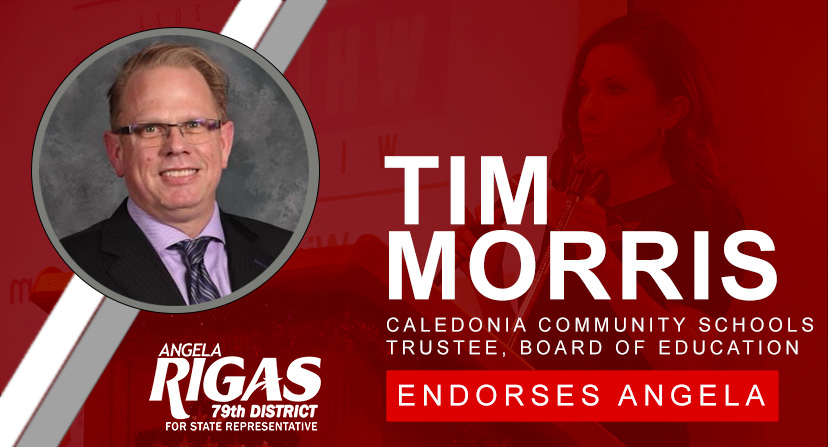 “I have known Angela Rigas for several Years. Angela is a constitutional conservative and a fighter. She is a true MOMA BEAR. She will fight for the 79th District in Lansing. I fully endorse Angela as the next state rep for the 79th district.” 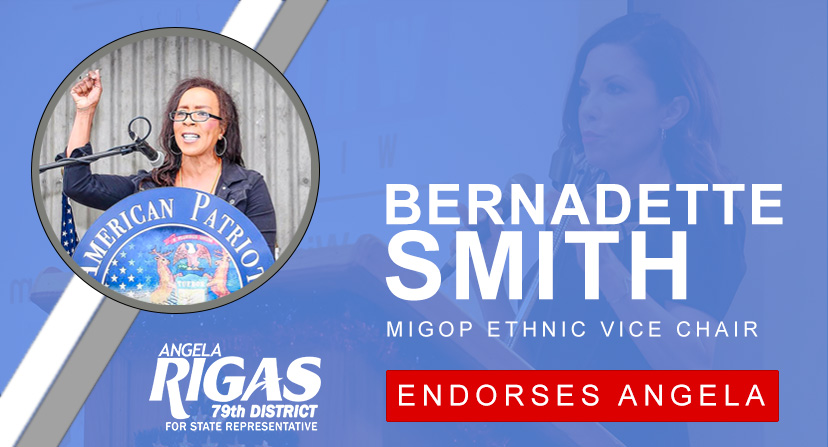 “Life, Liberty and the Pursuit of Happiness”
“I can’t think of a better person than Angela Rigas to represent us in Lansing

and protect our fundamental freedoms. You have my 100% endorsement.” 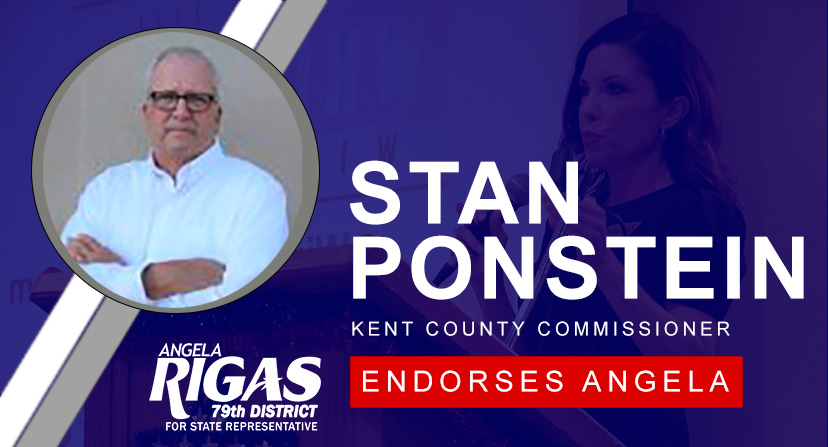 “Angela Rigas has been fighting for the America First agenda for the better part of a decade. She stood up to the tyrannical actions and mandates imposed by Governor Whitmer with Operation Haircut. She fought back when school districts were promoting a ludicrous agenda to indoctrinate and control your children. Angela will continue to fight for your freedom and liberty in the halls of the State Legislature as well.” 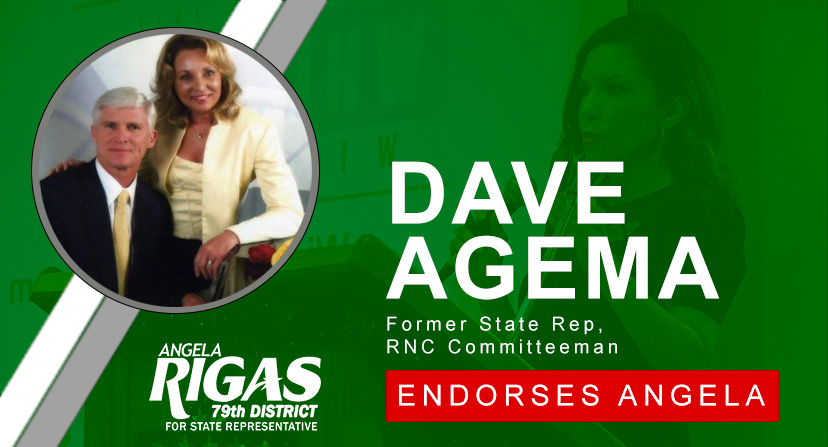 “Endorsement for Angela Rigas, 79th District for House Representative     By definition an endorsement is an act of giving one’s public approval or support to someone or something.    As a retired educator and restaurateur I was driven to run for the 72nd District House Representative in 2016 and came in 2nd to House Representative Steve Johnson.  I ran on the principles of Integrity, Common Sense, Business and Education.  I believe that Angela has displayed actions that have aligned these same principles as well and then some.  She is full of energy and is determined to do what is right.  As I also firmly believed and supported “balls are balls and strikes are strikes” which means what is right is right and what is wrong is wrong.    Please do your homework and make certain those who get involved in this political journey are truthful, knowledgeable, professional and will not be a puppet to past political falsehoods.    Let’s turn this state around by supporting and doing these simple steps:  take care of the family, take care of the street, take care of the school, take care of the city, take care of the state, take care of the country and finally take care of the world.    I fully endorse Angela Rigas who has dedicated herself to do an awesome job in getting us back on track.  “United We Must Stand!” 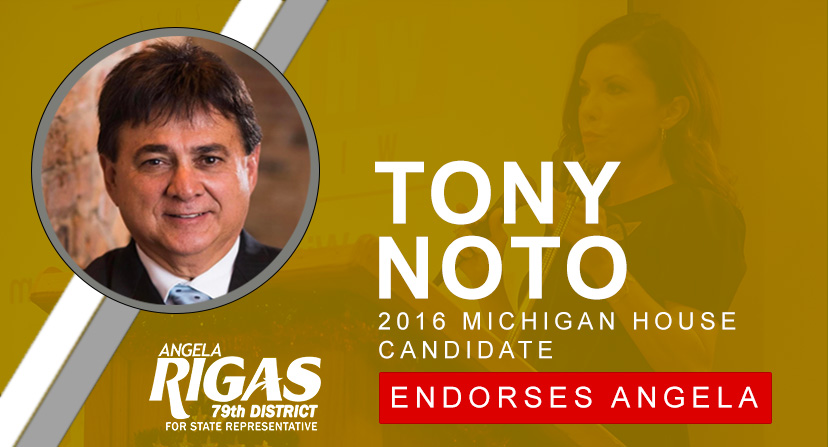 “I have had the honor of getting to know Angela and I proudly endorse her for Michigan State Representive for the 79th District.
As a fellow freedom fighter, Angela has been front and center fighting for individual rights and liberties of Michiganders. When Governor Whitmer told her, like all small business owners, that she had to close her doors and no longer serve customers… what did Angela do? She headed to the front lawn of the MI State Capitol, leading the way for others to follow suit, and stood up against unconstitutional government overreach by conducting Operation Haircut.
She stood strong and bravely, even when the full weight of the Whitmer administration came after her. She didn’t cower. She didn’t back down. She fought for the rights of every Michigan business owner and stood with them and supported them even through significant threats and severe fines. And Angela doesn’t just fight for her own rights and freedoms, but stands and works to support others, ensuring that no person will be left standing alone. She stood with and supported the famous restaurant owner Marlena, Holland Michigan’s Polish immigrant, who had escaped communism and started a whole new and free life in America, to only be shut down and jailed by Michigan government tyrants when she refused to shut down her restaurant during the State’s COVID-19 mandates. Thanks in large part of the the help and support of Angela Rigas, Marlena’s Bistro and Pizzeria is now back open and business is better than ever.
Angela is a born leader. She is intelligent, well spoken, constitutionally-minded, driven, and strong. She is not what we typically see from our Michigan Republican lawmakers; politicians who care more about votes and campaign donors than what is right for our State, our Country, and the People of Michigan. Angela is running for State Representive not because she wants to be a politician, she is running because she is compelled to help save our country. She is a patriot and willing to take on the swamp and the Marxist left who are destroying our great nation.
I am proud to endorse Angela Rigas for State Representive for the 79th District of Michigan. I know she will be a very strong voice for medical freedom, ethical and sound choice in science and medicine, election integrity, and will always do what is right for The People of Michigan.” 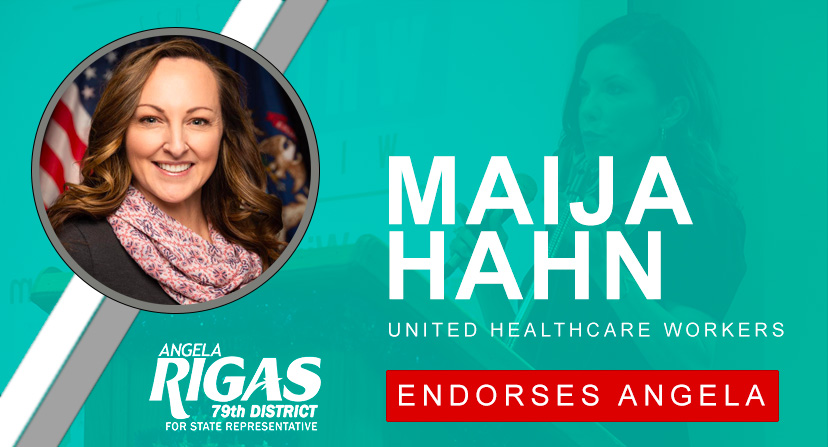 “As a voluntaryist, it is not my usual belief system to endorse or vote for people. Instead, I vote for “things”. I stand behind policies that provide the preservation of freedom and individual liberty. In the quest for a more free lifestyle, it does me no good to ignore candidates that aim to support the sforementioned individual liberties. I asked that Angela Rigas sit down with me and allow me to gain further insight into their beliefs and what they stand for and support. To my pleasant surprise, she is worth getting behind. My views are my own, and I only speak for myself. I officially endorse this Patriot!” 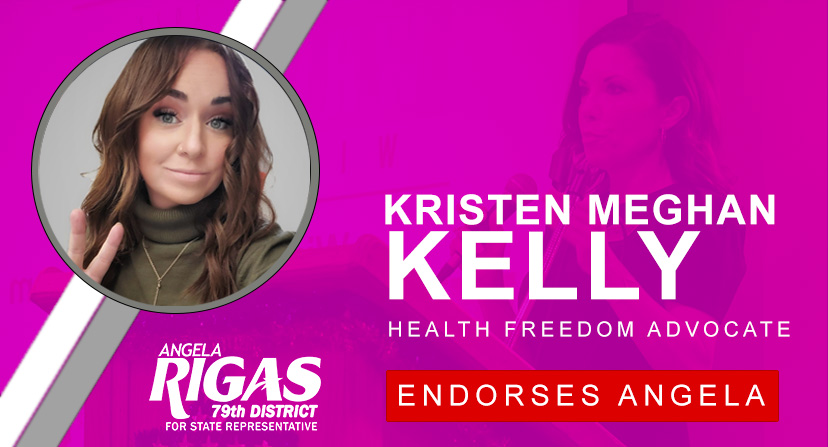 “Do you live in Michigan’s new 79th house district? If so, I ask you to stand behind Angela Rigas in her candidacy for state rep. I have known her for many years now, and have seen her at many freedom-fighting events throughout the years, volunteering countless times, and always fighting for what’s right. She’s not afraid to do the right thing even if it’s politically unpopular, and whether she wins the race or not, she’s going to stay active in this fight and take on government overreach for many years to come. That’s the kind of person we need in Lansing. “ 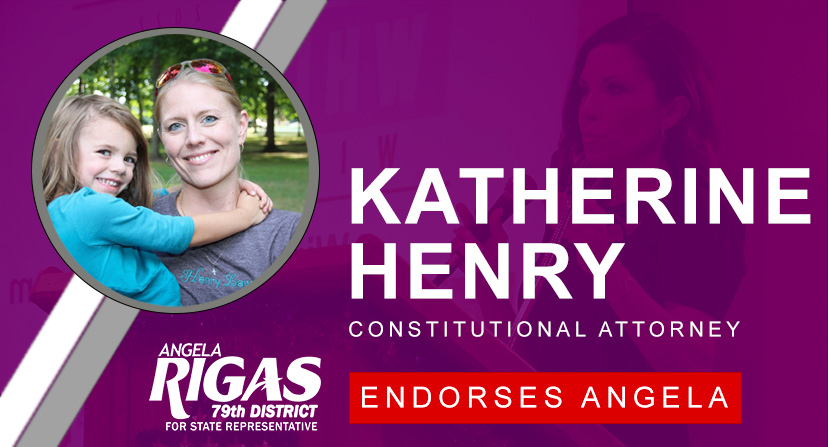 “I strongly support Angela Rigas for representative of the Michigan 79th District. Angela is a Constitutional Conservative and has demonstrated she is willing to fight to preserve our liberties. She is Pro-Life and upholds the family values that have made our country strong. She believes our election process should be beyond reproof and registered voters should never have to wonder whether malfeasance took place. Angela supports law enforcement and the Rule of Law. If your values align with hers, I encourage you to vote for her. She will fight for the things we hold dear.” 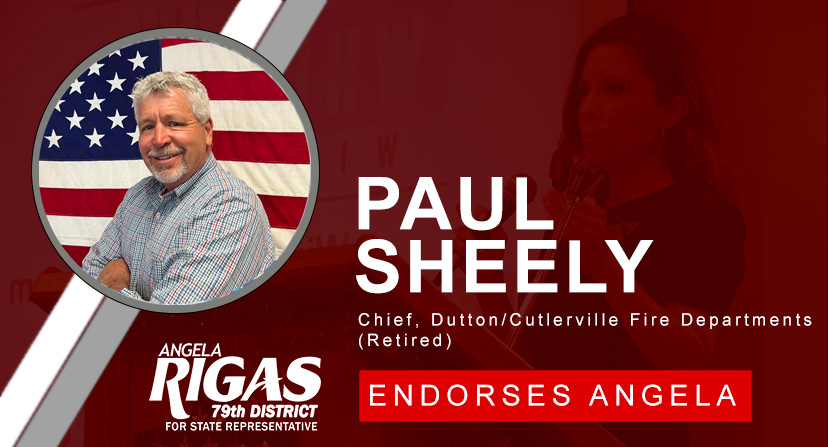 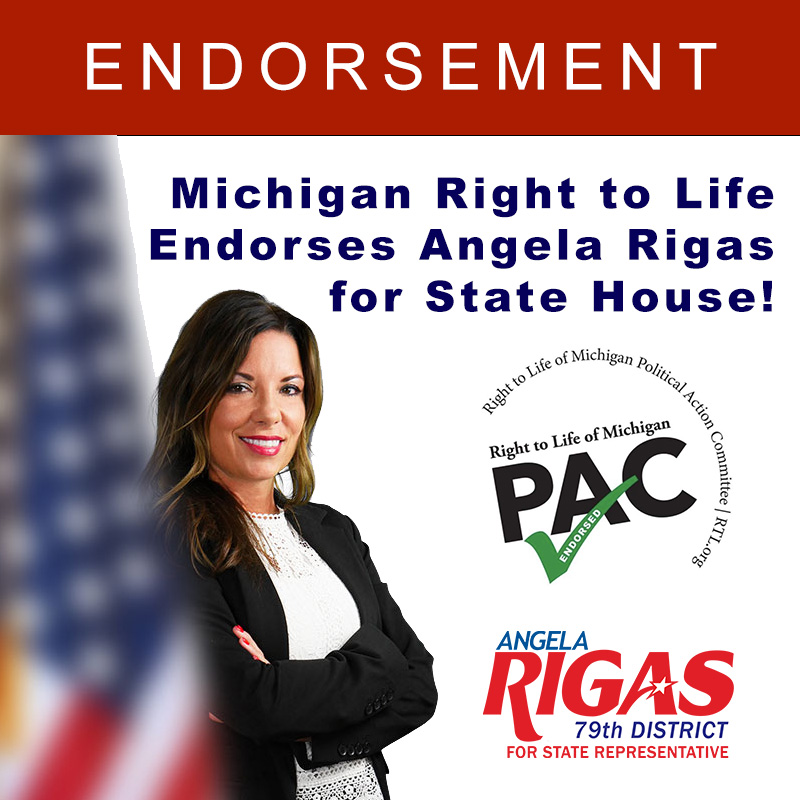 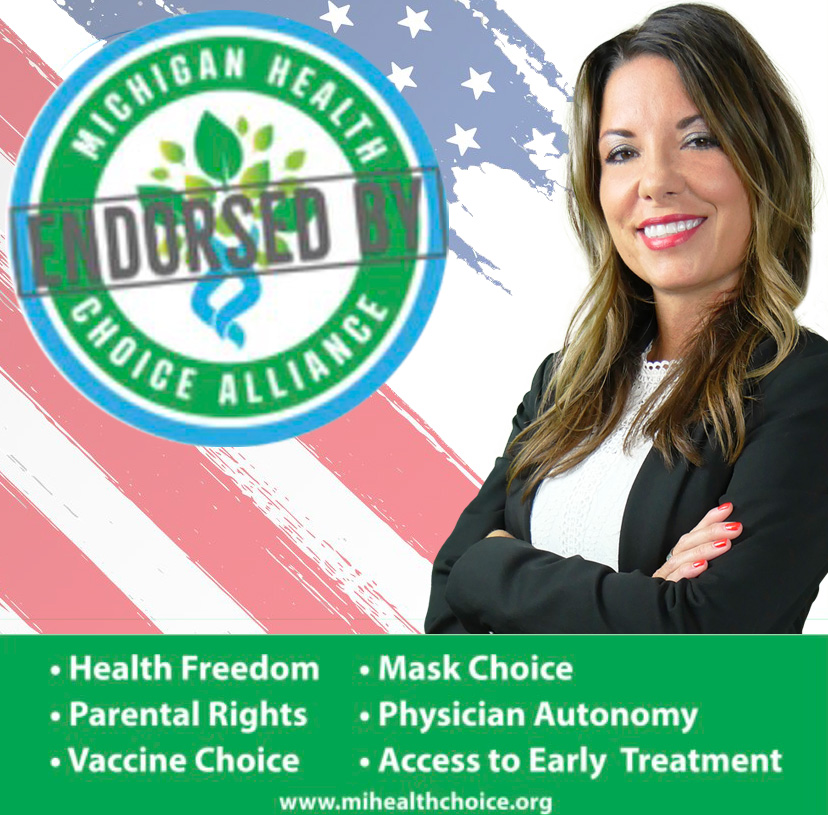 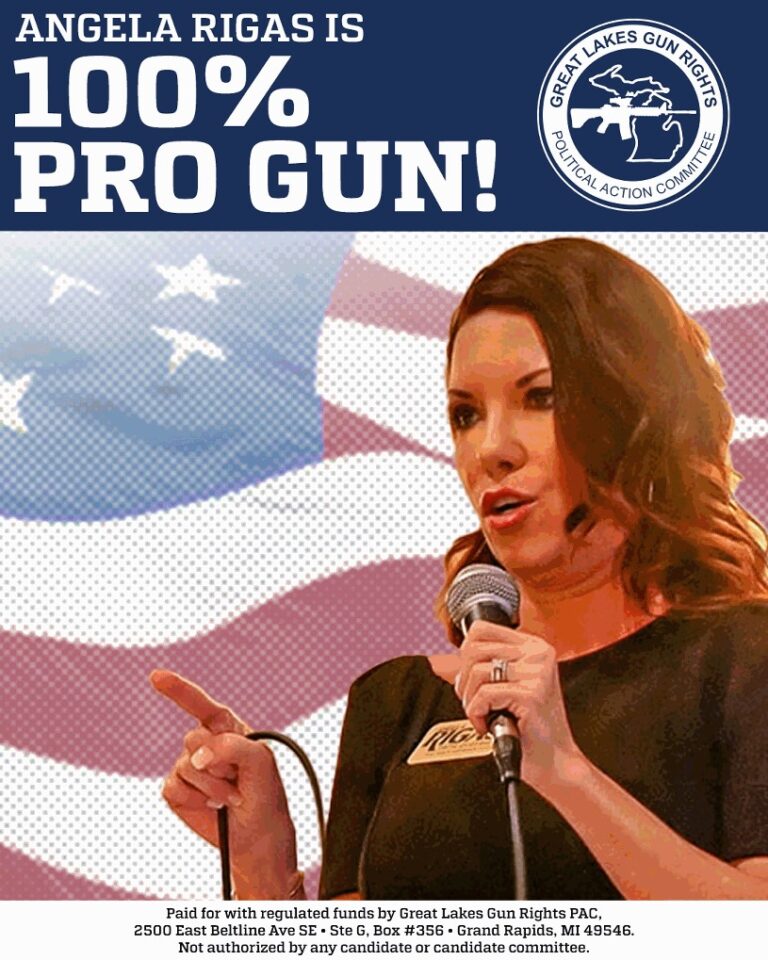 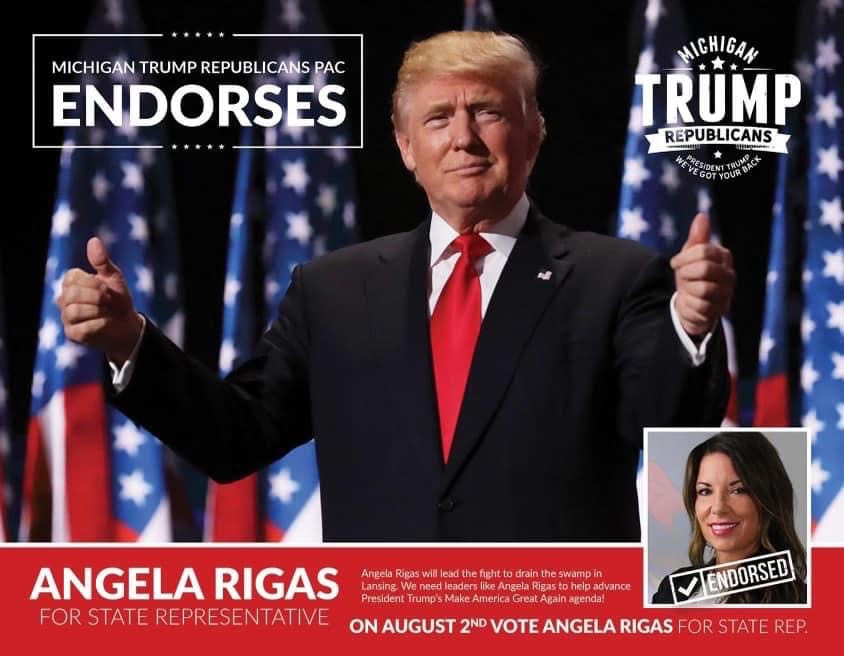 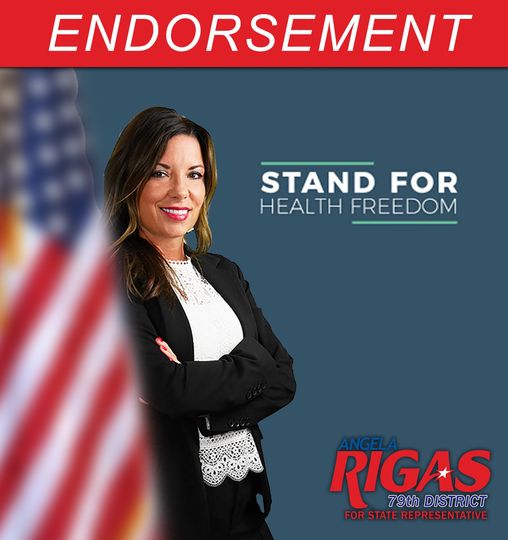 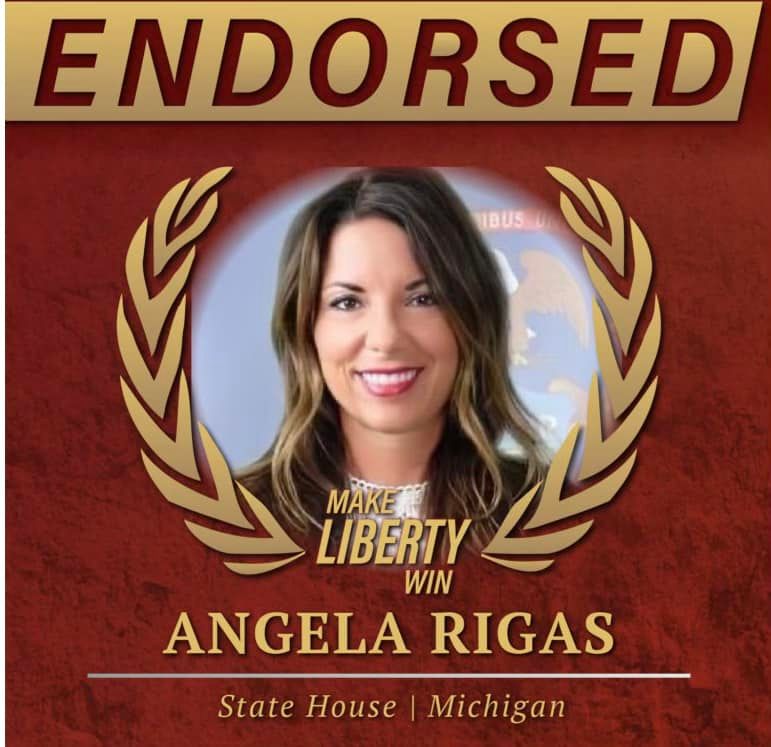 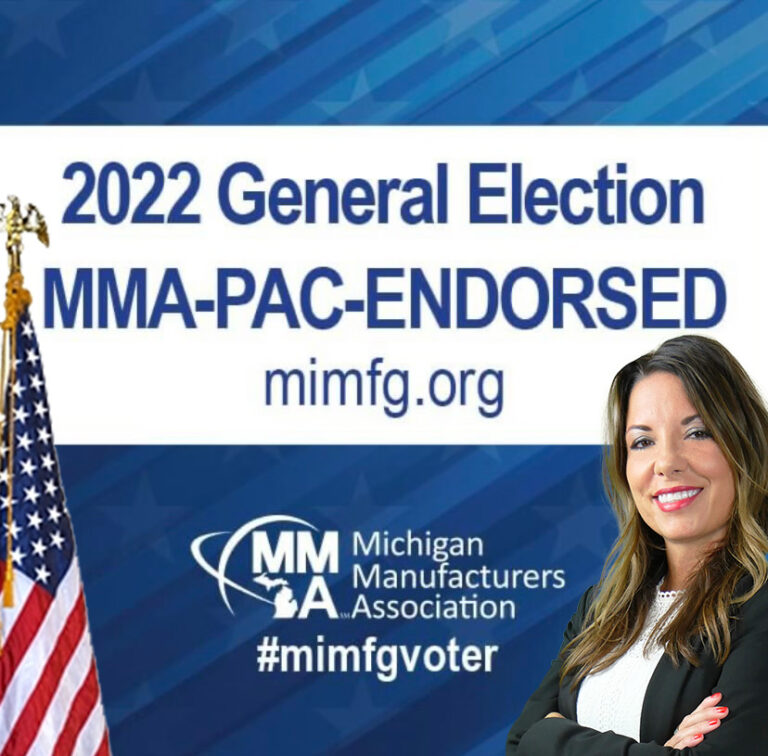 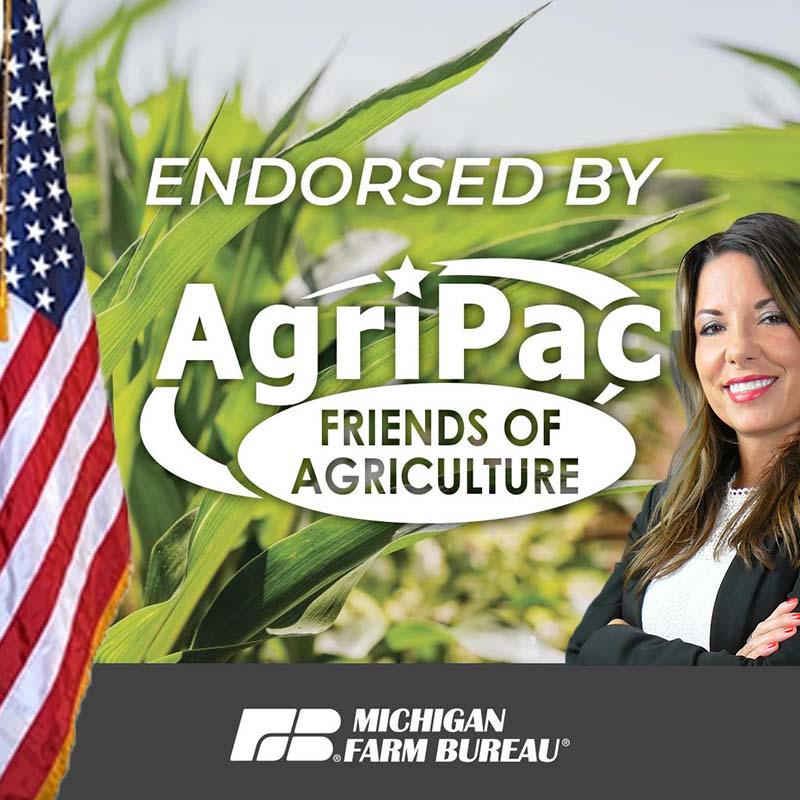 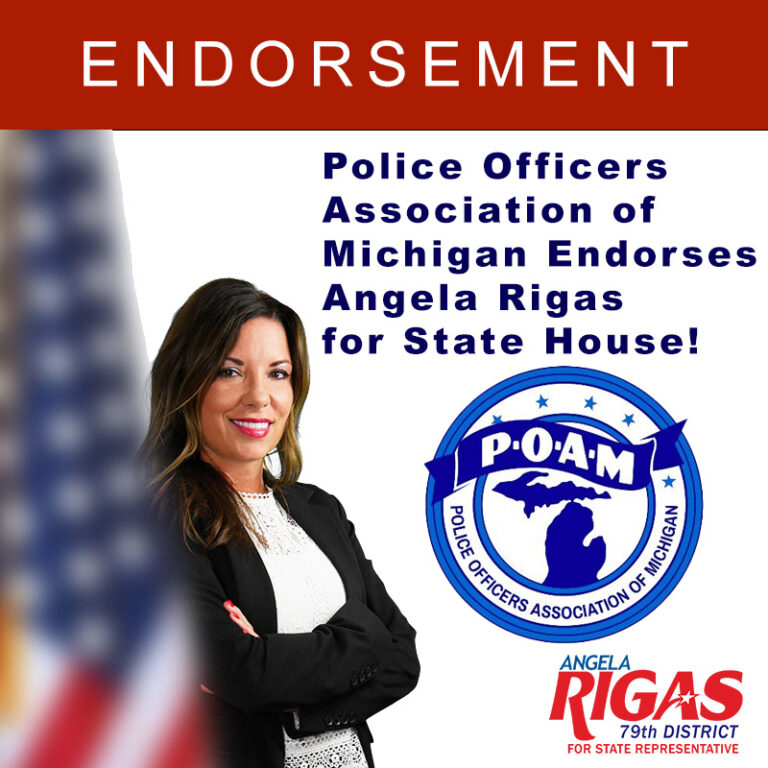 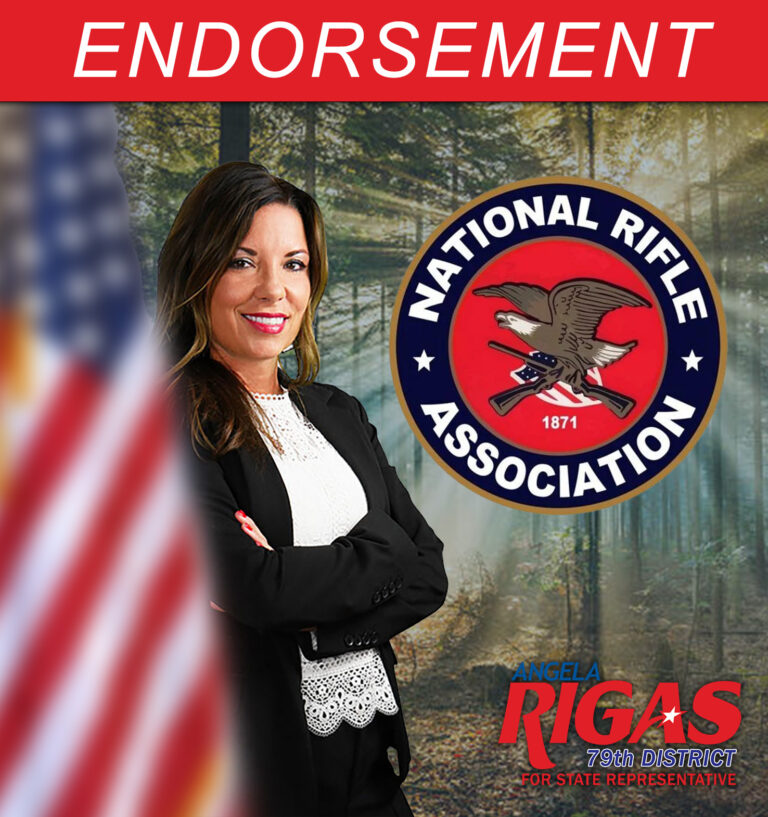 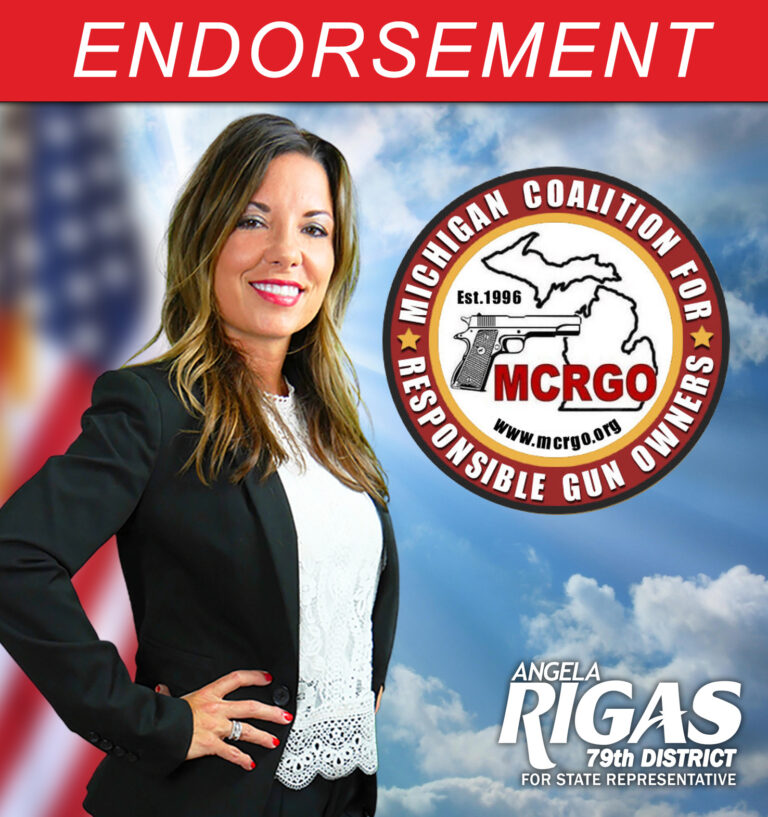 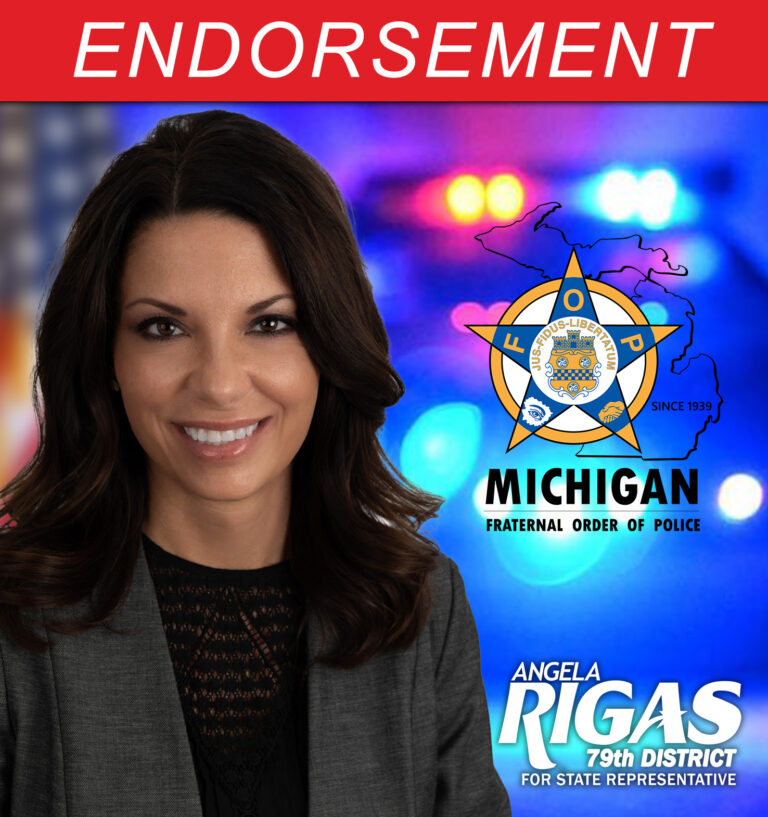